President Lynn Babington’s Statement Regarding Unrest Across the Nation

To the Chaminade community:

We mourn the tragic death of George Floyd and join those around the nation, and the globe, in calling for an end to the institutional racism that has plagued our nation for far too long.

The pain and anguish of protesters gathering peacefully in US cities is palpable and justified.

It is also familiar. And in their chants we hear not only George Floyd’s name but the names of countless other African-Americans and people of color who have been killed.

Silence is not the answer to racism, to bigotry or to violence. It never has been. Now is the time for a dialogue, for action—and for change.

Now is the time to speak the names of those we’ve lost so they will not have died in vain.

As a Marianist educational institution, we are proud to stand for social justice. It is written into our mission.

And we believe our work to end racism begins at home. Chaminade University has built a safe and inclusive campus community, condemning discrimination. Over the years, we have sought to examine and amend our policies and ensure that all voices are at the table.

There is always more to do, however, and this moment in our nation’s history should give all of us pause. We must ask ourselves: how will we meet this crisis and seek to right the wrongs that were decades in the making?

How will we be the change?

It is everyone’s kuleana to root out racism wherever it is found. To be intentional, active, urgent and unified in addressing the systemic inequities and injustices that we face as a nation.

The images on the news and across social media should also fuel our resolve: the time for real change is here. This is too important to put off any longer.

We can begin on a different path forward by condemning as a nation and as citizens these violent acts and offering to support one another in building a new future together.

Many of you are struggling right now with the strongest emotions: you are outraged, you are grieving, you are afraid. These feelings are both incredibly difficult and absolutely understandable.

Know that your campus community is here for you at this time and always.

We are here to listen, to learn and to lean into the hard work of racial reconciliation together. As one ‘ohana, we will be part of the solution.

Dr. Lynn Babington talks to KHON2 about our new $5,000 graduate and online undergraduate scholarship in celebration of 200 years of Marianist Education. The one-time $5,000 scholarships are available to new, incoming students looking to pursue a master’s degree or online bachelor’s degree.

At Chaminade University, we are committed to improving the community we call home through education.

Learn more about our $5,000 scholarships here.

Dr. Lynn Babington returned from a residency at the University of Oxford. She had a wonderful time connecting with fellow academics from around the world and gained valuable insight into other institutions and research programs. She’s eager to share what she learned with the Chaminade community. Check out her photos below. 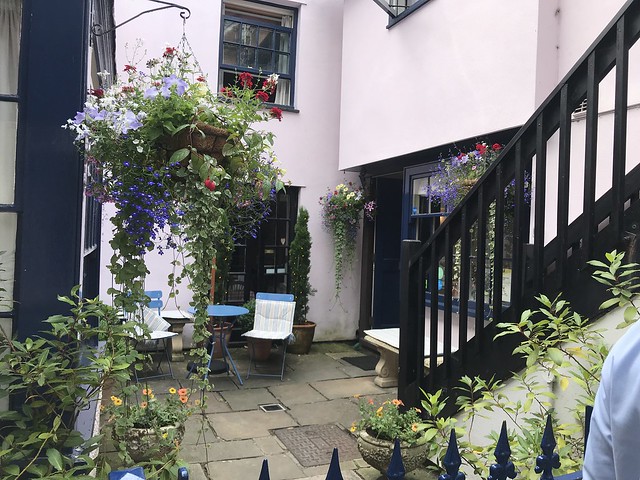 Chaminade donors, faculty, staff and board members gathered on Tuesday, April 23 to celebrate the capping of the Bridges to the Future campaign.

Several students spoke at the event about the impacts the campaign has had on their time at Chaminade, including second-year ‘Aulani Oka who received a scholarship because of the campaign.

“I may have only been here for two years, but as a beneficiary of this campaign I can honestly say it’s changed my life,” she said. “I would not be standing here right now without your help. You have made a difference in my life, and the lives of many other students. I will do my best to prove myself worthy of this honor, and hopefully pay it forward to others in the future.”

The campaign was the university’s most ambitious fundraising campaign, raising $118 million. Funds raised supported student access and success, academic excellence, athletics programming, a vibrant campus environment and impacts in the community. Some notable impacts from the campaign include:

Chaminade University is relevant, innovative and contributing to the betterment of society.

Those are the three pillars of Dr. Lynn Babington’s vision for the institution she now leads.

Babington outlined that future at her inauguration ceremony January 20 at the Richard T. Mamiya Theatre, during which she was formally installed as the university’s 10th president in front of an audience of religious leaders, community dignitaries, and university regents and faculty.

In her inaugural address, Babington made clear that in forging an ambitious and bold path forward, Chaminade — celebrating its 62nd anniversary in 2018 — isn’t seeking to forget its rich heritage or leave behind its Marianist traditions. At the same time, she said, Chaminade must lean into headwinds and make no small plans in an increasingly competitive landscape.

“We are driven by a deep commitment to reach new heights,” she told attendees. “Unified together, we will find ways to not only meet the high expectations we have for ourselves, but exceed those our community and our world have for us. Because if not us, then who?”

Babington started at Chaminade on August 1 after serving as interim president and in other leadership roles at Fairfield University in Connecticut. In her first few months at Chaminade, Babington sought to focus on listening — to all sorts of university stakeholders— about where the institution is, what makes it special, and where it should be headed in the 21st century.

And even as she’s pledged to usher in a new era of innovation, growth and opportunity, Babington has stressed that she intends to only further strengthen Chaminade’s core mission — to serve as a service-oriented institution focused on social justice, building community and preparing tomorrow’s leaders to take on some of the world’s greatest problems.

That commitment to honor the past while looking ahead to the future was on display at the inaugural mass and installation celebration — and the pa’ina festivities that followed, where scores gathered at Chaminade Plaza for an afternoon of food, fellowship, gift giving and hula.

At the inauguration, several symbolic items were presented to Babington, including the university’s presidential medallion, made of kukui nut and suspended on a four-strand Niihau shell lei.

Fr. Thomas J. Fitzpatrick, S.J., staff chaplain of Fairfield University read a poem he wrote asking God to guide Dr. Babington and to let “all our spirits mingle and soar as we reach for truth, wisdom, justice and peace.”

The Marianist Province of the U.S. gave Dr. Babington a depiction of Our Lady of the Pillar, one of only three like it in the world. The other two are housed at Chaminade’s sister schools — the University of Dayton in Ohio and St. Mary’s University in San Antonio, Texas. Presenting the depiction were Dr. Steven R. Neiheisel, executive director of the Association of Marianist Universities; and the presidents, Dr. Eric F. Spina of University of Dayton and Dr. Thomas M. Mengler of St. Mary’s University.

Also presented to Babington: A royal walking stick with a strong link to Chaminade’s roots.

Brother Dennis Bautista, a Chaminade University alumnus and a professor at St. Mary’s University, told inauguration attendees the walking stick engraved with King David Kalakaua’s name was found in the national archives of the Marianist Province at St. Mary’s.

In fact, it was discovered in the Brother Gabriel Bertram Bellinghausen collection at the archives. Bellinghausen was part of the first group of Marianists to come to Hawaii in 1883, became the first director of then-Saint Louis College (later Saint Louis School and Chaminade), and struck up a friendship with the king, who would attend plays and other events on campus.

“Since walking sticks … had been presented to those entrusted in leadership positions as symbols of authority,” Bautista said, “we felt that it would be appropriate for the king’s walking stick to come full circle — from Brother Bertram to Dr. Lynn Babington and return the royal artifact home to Hawaii.” At the inauguration, the Kalakaua walking stick was ceremonially presented to Babington before it was formally gifted to ‘Iolani Palace for public display.

Before the presentation of gifts, Babington sought to outline her vision for Chaminade.

She said the university must be “excellent and relevant,” underscoring the value of its educational opportunities to current — and prospective — students and the community.

It must also be innovative, seeking out partnerships and looking for opportunities to grow.

And it must always seek to contribute to the common good, to make life better for others.

“Higher education with a higher purpose is the life led here at Chaminade,” she said, in her inaugural address. “Our faculty and students are involved in not only community service but … opportunities to engage with and give back to the community as part of their course work.”

Her words spurred a standing ovation.

And the occasion of her inauguration also inspired poetry — literally.

At the inauguration day’s pa’ina celebrations fronting Sullivan Library, Dr. Allison Paynter stepped up to the microphone to recite a poem she wrote to mark the day called “Hopscotch” that begins like the playground jumping rhyme but then takes listeners on a journey with Babington.

The associate professor of English at Chaminade read, referring to the president:

Now, she feeds her soul
on the aina
embraces a new ohana
commits to living pono
brandishing her own sword
of inspiration on
this mighty hilltop.

Students, faculty and staff from all divisions and schools at Chaminade University enthusiastically greeted Dr. Lynn M. Babington Aug. 1 when she officially began her tenure as the institution’s tenth President.

Dr. Babington, whose appointment was announced last December by Chaminade’s Board of Regents, most recently served as Interim President at Fairfield University in Connecticut. Her previous roles at this Catholic university included Provost and Senior Vice President of Academic Affairs.

“Our new President is a highly regarded educator, administrator and thought leader who will further the progress we’ve made over the past two decades at Chaminade,” according to Board of Regents Chair Vaughn G.A. Vasconcellos.

“Dr. Babington’s fresh perspective and personal warmth will lead to new ways of invigorating the campus and all the communities we serve,” he said.

“Joining the Chaminade ‘ohana is a tremendous honor and privilege,” Dr. Babington said. “The university has a well-deserved reputation for its strong liberal arts foundation and Marianist mission of creating a more just and peaceful society.”

Having begun her career working with disadvantaged populations, Dr. Babington said Chaminade’s continued commitment to improving the community it serves “speaks to her passion” by addressing disparities in healthcare, education and the criminal justice system.

Dr.  Babington also praised Chaminade as having “tremendous growth potential” and looks forward to “building on the university’s solid foundation” by working closely with the campus community and supporters in the public and private sectors.

“As for our students,” Dr. Babington said, “I’m inspired by their pursuit of academic excellence and their outreach to needy populations through service learning projects. Moreover, the wonderful diversity of our student body makes Chaminade one of the most multicultural campuses in America.”

In addition to her positions at Fairfield, Dr. Babington held leadership roles at Northeastern University from 2003 to 2011 and studied as a Fulbright Scholar at Ben Gurion University in Israel.

In 2013, she was selected for the Robert Wood Johnson Foundation Executive Nurse Fellows program, a three-year leadership development experience designed to enhance the nation’s healthcare system.

More information on Dr. Lynn Babington can be found on her academic profile.