In celebration of International Women’s Day, Chaminade University faculty and students take a minute to weigh in on what a gender-balanced world means to them:

Dr. Joe Allen
Associate Professor, Criminology and Criminal Justice
“A gender-balanced world recognizes the differences and the similarities between and within various genders and celebrates them. This celebration means the provision of equal opportunity, sharing the gifts that each of us brings to the table and embracing the idea that all individuals should be treated with fairness and dignity. Gender is a lesser category of one’s humanity. This should not be forgotten.”

Keʻalohi Canady ’20
Business Marketing major from Honolulu, Hawaiʻi
“I believe we should live in a world where men and women have an equal opportunity to achieve their greatest dreams. A gender balanced world looks like everyone embracing inclusivity and being more open-minded.“

Dr. Katelynn Perrault
Assistant Professor, Forensic Sciences and Chemistry
“A truly gender-balanced world is not purely a numbers game. It is about creating a culture of gender balance. We need to actively work to create space in which women no longer feel the need to live in hyper-awareness—where we do not need to be on guard for subtle comments or behaviors that undermine our expertise, opinions or view that we deserve a spot at the table.”

Kiso Skelton ’21
Historical and Political Studies major from American Samoa
A gender-balanced world serves as a community where people embrace diversity and value all genders. It is important to have a gender-balanced world because we are stronger when we come together as one, and our purpose in this gender balanced world is to lift each other up, not the other way around. Furthermore, all genders are entitled to all opportunities that will positively impact them.

Dr. Lynn Babington
President
“A gender-balanced world is one where gender equality is a given—where people, regardless of their gender preference, have the same access to education and good jobs, and are equally represented in leadership positions and decision making. Gender balance, along with diversity and equality, in all sectors of society is critically important if we hope to build a strong and sustainable world.”

Skye Haraga ’21
Biochemistry major from Kāneʻohe, Hawaiʻi
“Gender diversity is about representing all genders. ʻAʻole pau ka ʻike i ka hālau hoʻokahi.’ (Knowledge is not limited to one school). You are not limited by your gender.”

Ashley Hill ’22
Education major from Kāneʻohe, Hawaiʻi
“To me, gender balance is something that everyone should be entitled to. As our society is changing we need to continue to shed light on the importance of gender equality. I believe that if we maintain this shift toward gender balance, not only in the workforce but in our communities, the world will be a more efficient society.”

Andrew Ines ’19
Business Administration major from Kalihi, Hawaiʻi
“Gender equality is important because women deserve just as much credit as us men do. Women can be just as strong as men.” 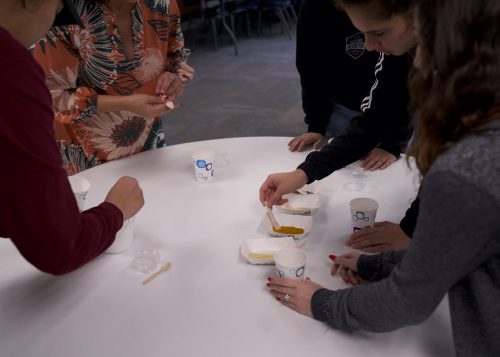 Hoʻoulu Scholarship Program students gathered a workshop about The Power of Paʻakai at Chaminade University on Feb. 13. The workshop featured a presentation, given by Kamehameha Schools representatives, exploring the traditional practices surrounding paʻakai, or Hawaiian sea salt, and its relevance today.

Recipients of the Hoʻoulu Scholarship, which is funded by Kamehameha Schools and Chaminade, are interested in careers in STEM and are passionate about the Hawaiian culture. They generally pursue degrees in Biology, Biochemistry, Forensic Science, Data Science, Environmental Studies, Nursing or Business.

Kamehameha Schools presenters Kimo Chun, program manager, and Sandra Tanaka, employer engagement coordinator, drew from ʻike kupuna, or wisdom of our ancestors, to explain to the 25 attendees how the power of paʻakai is applicable to them and their career development. Paʻakai serves a variety of purposes in Native Hawaiian culture. It is used in blessings, cleansings, medicine, food preservation and cooking. The rock salt is the product of a great deal of preparation including hours of physical labor done mostly in the summer months. Regardless of the amount of hard work that goes into cultivating paʻakai, the presentation emphasized that it is to be shared and given freely with aloha. 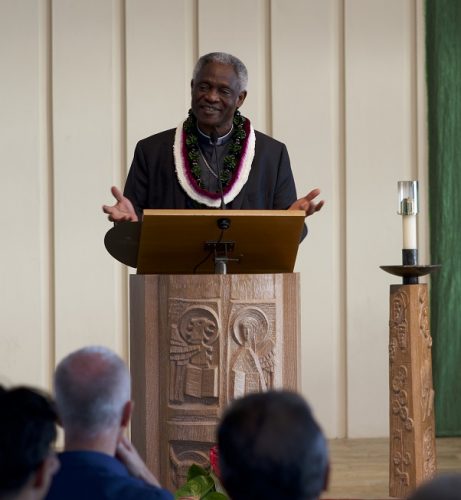 The Cardinal spoke to Chaminade students, faculty and staff about climate change, labor and education in light of Catholic social teaching.

Cardinal Turkson grew up in Ghana in West Africa. His father was a carpenter and his mother grew vegetables. From a young age, his family instilled in him a deep relationship with the environment. We are all made from the earth’s elements, teaches Cardinal Turkson. God intended us to be co-creators of this earth, but somewhere along the way with consumerism and economic growth, we have become irresponsible co-creators. 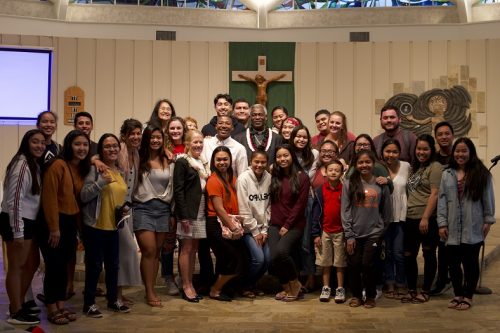 Cardinal Turkson advocated for a return to a tender relationship with creation. Our concept of labor and work need to be reviewed. Labor, he said, refers to the way we exercise our talents and creativity. It is an expression of our dignity. It is through tender, peaceful, creative work that we can create transformation and truly become God’s co-creators.

“The future of the world is not just in the hands of the politicians,” says Cardinal Turkson. “Change can come from each of us.”

Friday, October 26 marked this year’s Pacific Island Review. Each fall, the lively event is an opportunity for Chaminade student cultural organizations to showcase their talents through music, dance and performance. This year’s annual event also featured dinner and a heated lip sync battle.

If you missed this year’s event, be sure to watch the highlights in the video below and then join us in the spring for International Extravaganza!

“You are very welcome here.”

The Ho‘oulu Scholars Welcome Dinner on September 7, 2018, began with a very welcoming message from Dr. Helen Turner, dean of natural sciences and mathematics and vice president of innovation at Chaminade University. “We are delighted that you are here. Many applied but few were chosen—the Ho‘oulu Scholarship represents an investment in the future of our community here in Hawai‘i.” 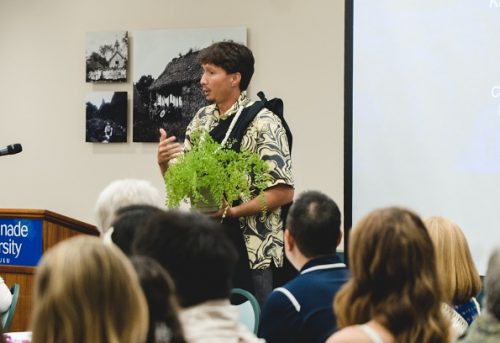 Chaminade faculty and staff gathered on campus with families from across the state to celebrate the new class of scholars and officially welcome them to the Chaminade ‘ohana. The dinner began with a traditional oli led by returning scholars and Kahoalii Keahi-Wood, cultural engagement specialist at Chaminade University.

President Lynn Babington motivated the students to make an impact. “We are counting on you to lead us into a better world,” she said. “You have an entire ‘ohana here, and we are so invested in your success.”

Thirty six students received this year’s scholarship, joining a cohort of 89 Ho‘oulu Scholarship students on campus. But the evening also brought an exciting announcement from Dr. Helen Turner. Earlier that week, Chaminade University received a prestigious $1 million grant from the National Science Foundation to expand the program and offer an additional 15 scholarships next year. She also announced that next year an additional major will be available to Ho’oulu Scholars—the brand new Bachelor of Science in Data Science, Analytics and Visualization. “This will be one of Hawai‘i’s hottest degrees,” said Dr. Turner. “We are the first school here to offer it in support of Hawai‘i’s transition to an innovation economy.” 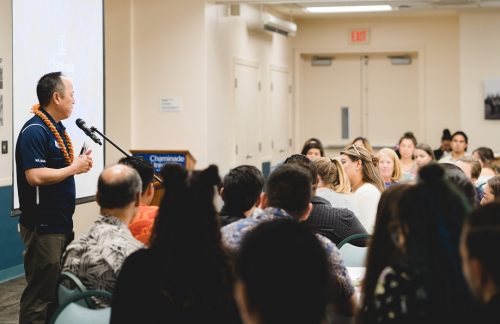 The Ho‘oulu Scholarship is a partnership between Chaminade University and Kamehameha Schools to build a new generation of Hawaiian scientists, health practitioners, forensic specialists, environmental professionals and business leaders. Students who are accepted into the program receive full tuition assistance, consideration for a housing stipend and wraparound academic support.Livingston “Jack” Wong, CEO of Kamehameha Schools, inspired the students to work hard and compete. “If you work hard and compete,” he said, “you can do anything.”

Having grown up in the low-lying Marshall Islands, Chaminade University student Broderick Menke knows firsthand about the devastating effects of global warming and sea level rise. Tidal flooding regularly threatens homes and freshwater supplies in his island nation and may make many areas unfit for human habitation in coming decades.

An Environmental Studies major, Menke conveyed the plight of his South Pacific home at the 13th Conference of Youth. Held during November 2017 in Bonn, Germany, this gathering of young people from 114 countries had a theme of “Talanoa Mada – Youth Accelerating Climate Action.”

“Out of all my international trips, Germany was a unique time,” Menke said, because the Republic of Fiji presided over the conferences.

“The significance of that is that the Pacific Islands were able to amplify their voices and issues,” he pointed out. “As a Pacific Islander, I was proud to give a face to the climate realities that we are currently facing, as my home is one of the most vulnerable countries.”

Menke was selected to lead the Pacific Voices in Unison – a team of six youth from Fiji, Kiribati, Samoa, the Solomon Islands, Vanuatu and the Republic of the Marshall Islands – who shared their stories of resilience in the face of climate change.

He was also active with the “Have Your Sei” campaign in Bonn, during which “Pacific Climate Warriors” called for ending the use of fossil fuels and providing financial assistance to countries facing irreversible damage from rising sea levels and other environmental threats.

Being invited to participate in the two conferences was the product of “other people’s hard work,” Menke emphasized.

“I commend everyone out there doing immense local work to improve their own environment in their unique way,” he said, because everyone has a duty “to partake in nurturing our planet.”

As for his college experience, Menke said he was attracted to Chaminade based on the small class sizes and recommendations from family members who attended the university.

“When I got to Chaminade, it was more than I expected,” he said. “It was better! The whole idea of a smaller campus gives you the opportunity to get to know many people, and I love hearing stories and their experiences.”

Menke credits one of his professors, Environmental Studies Director Gail Grabowsky, with being especially important in clarifying his academic and career goals.

“I came in with a scattered mind, thinking I will graduate and get into anything environmental in the future,” Menke said. “But she is helping me narrow down my field. She knows me more than I know myself, and I am extremely thankful for her guidance and moral support.”

After graduating from Chaminade, Menke plans to further his education at a university on the East Coast or possibly in Aotearoa (New Zealand).

His message to other climate warriors?

“Let’s all take the power back into our hands,” he said, “and work towards a more sustainable and resilient future.”

Chaminade University offers a bachelor’s degree in Environmental Studies, which prepares students for careers in fields such as environmental policy, law, economics, communications and information, consulting, science, ethics and health.